As we have covered before, SLAM systems use one or more cameras embedded on a device to simultaneously localise the device’s position and orientation whilst also mapping the environment. Before we deploy a SLAM system, it is crucial that we calibrate the camera to account for its internal properties and other external factors that can affect the images generated. In order to understand our camera calibration process at Kudan, we must first go over the properties of a camera.

Properties of a camera

Two different cameras at the same position and orientation can generate two different images. This is because the images generated depend on various properties of the camera we refer to as ‘intrinsic’ parameters. These include properties inherent to the camera such as the size of the camera/aperture, the focal length of its lens, the distortion caused by its lens and so on. Due to this, for single camera setups we must know and account for the camera’s intrinsic parameters in order for our SLAM algorithms to work. 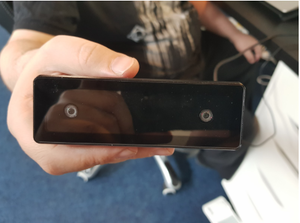 Now for setups which include two cameras, we not only need to know each of the cameras’ internal properties, but also their ‘extrinsic’ parameters. Extrinsic parameters refer to the position and orientation of both the cameras (how far apart the cameras are and what angle they are facing relative to each other). 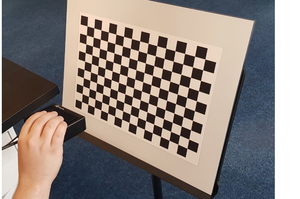 As we can see, images can be severely distorted by the camera and straight lines can appear curved. It is therefore very important to calibrate the cameras before deployment and by having a robust calibration process, we can ensure that our algorithms are always performing at their best with different camera setups.

Next: Camera Calibration for SLAM(2/3)